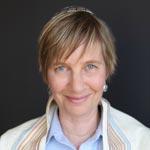 Rabbi Meyer was ordained as a Reform rabbi by the Hebrew Union College-Jewish Institute of Religion in Los Angeles and spent 10 years serving various congregations in the greater Los Angeles area and as the director of the Union of Reform Judaism’s Introduction to Judaism programs in Southern California, Arizona and Seattle.

Prior to her ordination Rabbi Meyer spent 15 years teaching in the Judaic Studies and German Language departments at “the other USC.” During her tenure as URJ Introduction to Judaism director, she guided countless Jews-by-choice on their conversion journeys. A passionate and gifted teacher, Rabbi Meyer also served on the faculty of the Florence Melton School of Adult Jewish Learning at Stephen Wise Temple in Los Angeles and the West Valley Melton Consortium where she taught a variety of courses on Bible, Jewish history, and Jewish denominations.