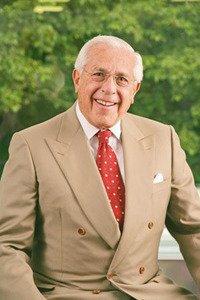 Gordon B. Zacks z"l, an expert on the Middle East and staunch supporter of Israel, worked as Chairman of the Board of the NASDAQ listed company R. G. Barry Corporation, the world's largest marketer and supplier of comfort footwear. Recognized as an authority on the qualities of leadership, Zacks was a frequently sought after speaker. He served as a behind-the-scenes advisor, confidante, and friend of Vice President and then President George H. W. Bush on Israel/American relations, the Middle East peace process, Soviet Jewry, Ethiopian Jewry, and the changing political landscape of the American Jewish community. Zacks was integrally involved in a wide variety of Jewish nonprofit endeavors ranging from AIPAC to the National Republican Jewish Coalition.

He served as Chairman of the Florence Melton School, which was founded by his mother Florence Melton, for the last 15 years of his life. The school provides pluralistic adult Jewish education in more than 50 cities in six countries around the world.

He authored the book, Defining Moments: Stories of Character, Courage and Leadership, a collection of essays on leadership. He also authored Redefining Moments: End of Life Stories for Better Living in the last two weeks of life, as it was critically important to him that others learn and share about how to live a better life from an end-of-life encounter. Zacks graduated from The Ohio State University in 1955 with a BA from the Fisher College of Business. He passed away on February 1, 2014 at the age of 80.