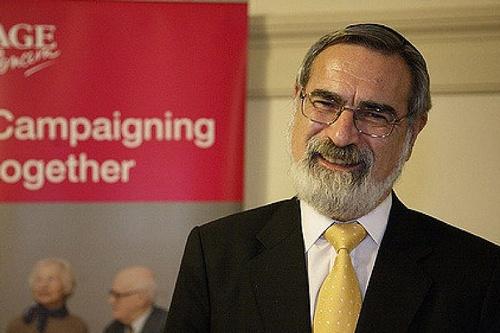 (JNS) Jewish groups expressed their condolences over the passing of former U.K. Chief Rabbi Lord Jonathan Sacks, who died early Saturday morning at the age of 72 after recently being diagnosed with cancer.

“Rabbi Sacks was a towering figure of great intellect, principle and moral clarity, whose legacy will forever live on as an inspiration to future generations,” tweeted the American Jewish Committee on Saturday.

Jewish and other leaders from around the world, including Israeli Prime Minister Benjamin Netanyahu and Israel’s President Reuven Rivlin, also mourned his passing and offered condolences to his family, his students and to British Jewry.

We are heartbroken to learn of the passing of our dear friend @RabbiSacks.

Rabbi Sacks was a towering figure of great intellect, principle, and moral clarity, whose legacy will forever live on as an inspiration to future generations.

May his memory be a blessing.
— American Jewish Committee (@AJCGlobal) November 7, 2020

In a statement, the Orthodox Union said that Sacks was “an intellectual giant whose unique blend of Torah scholarship, academic achievement, human sensitivity and social awareness allowed him to speak to the issues of our times to the broadest of audiences, and he did so with courage, clarity and optimism.”

Eric Goldstein, CEO of the UJA-Federation of New York, said in a statement that Sacks was “one of the great Jewish leaders of our time—and a truly kind and gentle soul.”

“At the core of his vast contributions to public life and discourse was his remarkable ability to create and communicate a compelling narrative, rooted in Torah and Jewish law, of tolerance, compassion and understanding,” he said.

The Florence Melton School of Adult Learning’s faculty, board and supporters expressed great sadness on learning of the passing of Sacks. “One of the world’s foremost Jewish scholars, his lifetime of work has had an incredible effect on Jewish communities around the world,” they said. “He led by example in using any means possible to spread Jewish knowledge—in person, online, on television, over the phone, via email and through his publications.”

The Melton School, which for 40 years has helped connect Jews globally through education, said it was honored to have had the rabbi’s support. “When we introduced our Yesod Leadership program, a joint project with the Jewish Federations of North America, Rabbi Sacks introduced the event and spoke warmly of the work of the Melton School, and its mission and vision for the Jewish world.”

In a statement, the Conference of Presidents of Major American Jewish Organizations said the rabbi was “among the great Jewish theologians and spokespeople of our time. Rabbi Sacks was a unique, brilliant and courageous voice in world Jewry.”

“His many writings and presentations will always be treasured by the Jewish people and others of all faiths,” continued the umbrella organization. “His ability to thoughtfully explicate complex and deep issues to audiences of all kinds gained him a devoted worldwide following among Jews and non-Jews alike, with political and religious leaders, in the media and on college campuses.”

In a statement shared on Twitter, the Board of Deputies of British Jews said Sacks’s “astounding intellect and courageous moral voice were a blessing to all who encountered him in person, in writing or in broadcast. His outstanding tenure as chief rabbi led to a revolution in Jewish life and learning which has ensured his legacy will pass not just through his own beloved family, but through generations of our community’s young people, too.”

Sacks is survived by his wife, Elaine, and their three children.