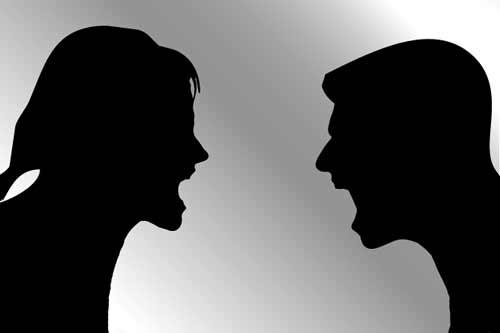 How did we get here?

When did people decide that they could no longer bear to disagree agreeably?

How is it that parents and children are no longer talking to each other, that husbands and wives are splitting up, that neighbors are no longer able to even say hello to one another in the morning, because they don’t see eye to eye on what is best for their country?

How did our relationships to others become so black and white that “my way, or the highway” became the formula for defining friendship, and that “you are either with us, or you are against us,” became the essence of modern political gospel?

How did so many people become the sole proprietors of the absolute truth?

Even if we agree that there are two sides to every story, what’s rare today is find someone who acknowledges that there is actually a third side as well.

Abram was forced to descend into Egypt (last week’s Torah reading, Lech Lecha), confronted with a famine in his new homeland, Canaan. Noticed for her beauty, his beloved wife, Sarai, was quickly abducted by Pharaoh’s officers and brought to him for his pleasure.  God cast a plague upon the house of Pharaoh, and Pharaoh perceived it as divine intervention.  He sent for Abram and castigated him for his misdeeds.

In this frightening bullying encounter, there is no room created for dialogue.  Pharaoh is convinced that he is right, that he did nothing wrong, and so he accuses, judges and sentences Abram, offering him absolutely no chance for explanation before he throws him out of Egypt. As Pharaoh sees it, if he is right, then Abram is wrong. Period. There is no in between, and so there is no room for discussion. There are only two sides to this story – the right side, and the wrong side.

Years later, in a similar situation, Abraham sojourned through the Philistine province of Gerar, where the king, Abimelech, pulled the same stunt as Pharaoh years before. Believing Sarah to be Abraham’s sister, Abimelech had her brought to him for his pleasure. This time, however, God appeared to the ruler and warned him not to take Sarah to him, for she was actually a married woman. After dreaming an extensive nocturnal back and forth exchange with God, Abimelech awoke, summoned Abraham to his court and confronted him, demanding an explanation.

“What is it that you have done to us? What wrong have I done that you should bring so great a guilt upon me and my kingdom? You have done to me things that ought not have been done.”

Then there was a pause, and Abimelech seemingly repeated himself, asking ”What then was your purpose in doing this thing?” (Gen. 20.9-10)

Although the first words out of the mouths of these two monarchs were similar, I would suggest that these encounters were not the same at all.

It seems to me that this repetition by Abimelech was meant to indicate to Abraham that, in fact, this was not actually a reprimand – this was a sincere inquiry.  Abimelech was not making a statement in the form of a question, the way Pharaoh had done years before. In truth, Abimelech was seeking understanding. He was asking Abraham to enlighten him, to share his perception of the Philistine culture so that perhaps he could understand better why a good man like Abraham had used such subterfuge in misrepresenting himself and his wife.

Pharaoh was not interested in explanations, or alternate perspectives. He saw Abraham as having wronged him and there was nothing to discuss. All that was left was to do was to toss this troublemaker and his entourage out and never lay eyes upon them again.

Abimelech too was distraught and offended; however, unlike Pharaoh, he was open to engaging this deceiver in a discourse in order to seek understanding, and maybe even find some sort of common ground.  Abimelech proffers the possibly that it was he who was at fault, that it was he who had laid the groundwork for this misunderstanding, although he had no idea what he may have done.   In other words, the king of Gerar demonstrates a genuine interest in listening, understanding, and perhaps even acknowledging that he is not as blameless nor as righteous as he might have thought, and that perhaps there is something to learn from this guest; therefore, he gave Abraham a chance to speak.

Sensing that it was safe to speak out, safe to share with Abimelech what on his mind, what had frightened him and led him to be somewhat deceptive, Abraham looks up and responds to the king’s inquiry,  choosing his words carefully.

“I thought to myself,” said Abraham, “surely there is no ethical code of behavior in this place, and they will kill me to get at my wife.” (Gen 20.9-11)

Notice Abraham’s calculated, thoughtful response.  Even with the invitation to honestly speak his mind and explain the basis for his actions, Abraham does not respond defensively or with direct accusations.  Rather, he shares his honest impression of the people of Gerar, he conveys his perceptions which, right or wrong, served as his motivation to withhold the whole truth.  In addition, Abraham rationalizes that even his lie was not a complete lie, but rather only a calculated a deception. That too he feels comfortable sharing within the atmosphere of openness that the king had established for this conversation.

The result of this give-and-take was the acceptance of responsibility on the part of Abimelech, who gives Abraham and Sarah gifts and money, and, unlike Pharaoh of Egypt, adds an invitation, “Here, my land is before you, settle wherever you please.” (Gen. 20.15)

One chapter and years later, Abimelech once again approaches Abraham, this time asking him to enter into a covenant wherein they will affirm their loyalty and formalize their commitment to transparency and honesty with one another, in all of their interactions henceforth.

It is at this point that the narrative spells our the extent to which these two great leaders had successfully forged an open channel for civil discourse.  It appears that Abraham bore a grudge.  But rather than just rebuffing Abimelech and telling him to take his offer and get lost, instead of sweeping his resentment under the carpet and letting it fester there, Abraham felt secure enough in their relationship and commitment to civil discourse to speak honestly, without fear of repercussions, and to reproach Abimelech for a well of water that Abimelech’s servants had apparently stolen from Abraham. The reaction from Abimelech was one of dismay.  He does not defend his servants, he does not makes counter-accusations.

In other words, he responds to Abraham, “Why have you kept this to yourself for so long?  Why am only hearing about this today?”  The well was returned to it rightful owner and the two men swore an oath, established a covenant, putting their differences to rest, and embracing a pathway toward peace and understanding.

It was not about who was right, or who was wrong.  It was about a willingness to listen, empathize, and seek to find a solution – to embrace the third side of the story, the side of every conflict that sheds light upon the crux of disagreement, dispels the binary mindset of “you are either with us, or you are against us,” and identifies potential for common ground and common interests.

Seeking out the third side of the story enables both parties to gain insights and understanding into the thinking of the other and paves a way for healthy collaboration, even between heretofore perceived rivals.

Isn’t it time for all of us to let go of the two-sided story paradigm, and open ourselves up to the third side of the story?