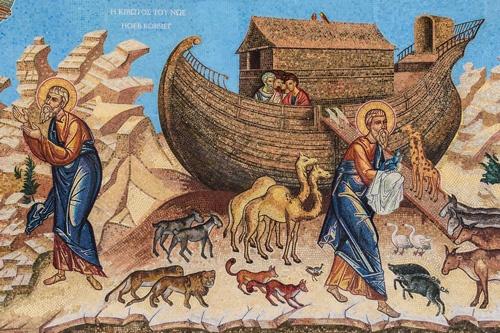 When I was young, Noah was a hero.

I have wonderful memories of a toy Noah’s ark model, with a ramp upon which I could, like Noah, march those animals, two by two, into that ark, and do my part, like my hero, to save the world. (And of course that song we sang on camp bus rides played a formative role in my Noah veneration too.)

A glance at the story as it unfolds in chapters 5 and 6 of the Book of Genesis points to Noah as unique, righteous, and beloved by humankind and by God as well:

And he (Lamech, Noah’s father) named him Noah (a derivative of the Hebrew word for rest), saying, “This one will provide us relief from our work and from the toil of our hands, out of the very soil which the LORD placed under a curse.” (Gen. 5:29)

The LORD said, “I will blot out from the earth the men whom I created—men together with beasts, creeping things, and birds of the sky; for I regret that I made them.” But Noah found favor with the LORD…Noah was a righteous man; he was upright in his generations; Noah walked with God. (Gen. 7-9)

Noah was a one of kind – a diamond in the rough. A real hero!

Or so I thought.

But then, as a teenager, someone stole away from me that childhood enamor for Noah, someone taught be to read Rashi, the revered 11th century biblical commentator whose brilliant, succinct textual insights can have a way of changing everything.

Based on a text from the Babylonian Talmud (Sanhedrin 108a) that attributes this disagreement to that of Rabbi Yochanan and his brother-in-law and study partner, Reish Lakish, Rashi’s decision to cite it here in his commentary just blew the wind out of my sails. Noah was, perhaps, not really all that righteous. Basically he was either an upright under-performer who could have done better if he was born into a different time and place, or he was actually only righteous in a relative kind of way, compared to the low-lives he was living among in his time . That is to say, objectively speaking, Noah was nothing special. Rashi further drives this point home when he comments so critically on a later verse that seems otherwise innocuous. “And Noah and his sons and his wife and his daughters-in-law entered with him into the ark because of the waters of the flood.” And Rashi, there based on a midrash, quips, “Noah, also, was of those people who are of little faith: he believed and he did not believe that the flood would come, and he would not enter the Ark until the waters forced him to do so.”

Feeling all smart , like I had discovered some kind of insider information, it gave me great pleasure throughout the years to point this out: “You know, Noah might have seemed righteous, but some suggest he really was not! Things were really bad, and so Noah was just the best that God had to work with at the time.”

And now, the truth be told – I wish I had never seen that disparaging Rashi.

Noah walked with God…and that should have been good enough. It should have been enough for me, it should have been enough for the rabbis of the Midrash and the Talmud too. And although a part of me knows that they might have justified their insights and commentaries based on the superfluous expression, “in his generations,” I would have preferred they went with the legitimate rabbinic position that dibrah Torah kelashon b’nai adam – the Torah speaks in the language of human beings, and therefore, the expression “in his generations” has no deeper meaning than to say that Noah was truly the man of the hour – even if he was not perfect. He rose to the occasion and preserved life – even if he did have a slight drinking problem (Gen. 9:20-23) In fact, much later, when the word of God comes to the prophet Ezekiel, he throws out the names of three of the most righteous biblical characters who ever lived – Noah, Daniel and Job – without apologetics, without an asterisk or footnote explanation. (Ezekiel 14:14), and without mention of Abraham in that short list.

So, I want to offer a third story here – I want to put on the table a spin on Noah – on all leaders for that matter – a story that I believe both Rabbi Yochanan and Reish Lakish could have embraced.

In his book “The Impeachment of Abraham Lincoln,” Yale law Professor Stephen L. Carter, spins a tale of what might have happened if the 16th president of the United States had survived the attack at Ford’s Theatre, and lived to face his political detractors.

In his prosecution of the war, he did a lot of things that people don’t really talk about…. But I don’t think we should pretend that because he was heroic, and because we admire him so, nothing he did can be questioned. It’s a fact that he suspended habeas corpus and ignored court orders. It’s a fact that he jailed editors. It’s a fact that he used military force to keep the Maryland legislature from meeting so that it couldn’t vote on secession. Lincoln believed these things were justified as military necessities, and maybe they were.

Leaders are not perfect. Leaders step into the spotlight at their moment in history, balancing their own agenda with the vicissitudes that can often be out of their control. They bring along with them all their vices, foibles, imperfections and inconsistencies, and they get to work on addressing the issues at hand, following their own instincts, passionate about ”getting the job done.” Some follow the rules more closely than others, some do not. Some cut corners, take advantage of privileges, and even indulge in the vanities that accompany the limelight.

I do not ask that we forgive them for these – but rather, suggest that we not dismiss their accomplishments either if along the way they did not always do the right thing.

In fact, maybe that is actually what our sages wanted to teach through their didactic dissection of this text: that albeit Noah was not all that righteous, he should not be disparaged, for he was chosen in his time to carry out a very specific task. And in accomplishing that specific task lies his true “righteousness.” Do not judge him for his later drunkenness, nor for any other shortcomings he may have had. His passion and vision saved life on this planet from total destruction – and that is how he should be remembered.