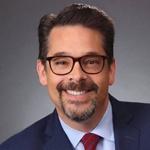 Rabbi Matthew D. Gewirtz began his tenure as the Senior Rabbi of Congregation B’nai Jeshurun in July 2006.  Previously he served as Senior Associate Rabbi of Congregation Rodeph Sholom.  He earned his Masters in Hebrew Literature from Hebrew Union College-Jewish Institute of Religion (HUC-JIR) in 1996 and was ordained by HUC-JIR in 1997.

A strong advocate of social justice, Rabbi Gewirtz is a founding executive committee member of the Newark Coalition for Hope and Peace, an interfaith organization of Jews, Christians and Muslims that is committed to ending gang violence in Newark. This past September, Rabbi Gewirtz was appointed as the President of the Coalition of Religious Leaders for the State of New Jersey.

A regular contributor to numerous professional publications, including the CCAR Journal, The American Rabbi and The Wisdom Daily.  He is the author of “The Gift of Grief: Finding Peace, Transformation and Renewed Life after Great Sorrow” (Random House).

Rabbi Gewirtz is a Fellow at the National Jewish Think Tank CLAL.  He appears as a commentator on religion on MSNBC’s Morning Joe and CNN’s State of the Union.  He has recently started his own television series as a tri-anchor of PBS’s (NJTV), A Matter of Faith with an Imam, Bishop and Rabbi.

A native New Yorker, Rabbi Gewirtz was drawn to B’nai Jeshurun when he learned of its long and storied tradition and was moved by its proud history and intergenerational sense of community.  Though impressed by the physical beauty of B’nai Jeshurun’s sanctuary, he was most moved by the community’s steadfast and abiding commitment to authentic worship, substantive Jewish study, and the prophetic values of social justice.

Rabbi Gewirtz is married to Lauren Rutkin, a philanthropy advisor.  They are the proud parents of Jake, Natalia and Sadie.  Rabbi Gewirtz is also an ardent fan of baseball (NY Mets) and football (NY Jets) and serves on the Newark Museum Council.