With Passover upon us, we have much to celebrate this time around. As we gather our families around the seder table this year (in person and online), the story of exodus resonates as deeply as ever-- we celebrate hope, renewal and breaking free from a year of constraint. As we know, Passover is one of the most sacred holidays on the Jewish calendar, and our varying backgrounds and customs make it that much more vibrant.

To prepare to celebrate Passover this year, we polled our staff for their favorite recipes, traditions, and memories. Just like we retell the stories of our ancestors, we thought the re-telling of our favorite memories and customs would be a unique way to learn more about each other and spark inspiration this Passover. We wish you a wonderful holiday of health and happiness. And from our family to yours – enjoy our Melton staff responses below – equally delicious and uplifting! Recipes below.

Tradition: We make "Frau Dreyfus' Passover Crepes" as a breakfast treat during Passover.This tradition was passed down from my Oma (paternal grandmother). The crepes are yummy, but the story retold each year (just like the seder narrative) is equally as significant. As a young woman in the weeks after Kristallnacht, my Oma fled Vienna and illegally sought refuge in Switzerland. The Jewish community supported her, my Opa, and eventually their young family during those difficult times. The Dreyfus family were pillars and leaders of the Swiss Jewish community and so this recipe is intrinsically tied to the memory of how the Jewish community was there for them at a time of great need.
Rabbi Dr. Morey Schwartz, International Director,
Melton International
Location: Hashmonaim, Israel

Tradition: Drinking a fifth cup of wine, in celebration of returning to the Land of Israel. I do it because my father-in-law did it, so I am hopeful that my kids and grandkids will continue the tradition! We always say that the four cups are parallel to the four languages of redemption but actually, there are five languages of redemption in the Torah and this verse is the fifth that gets left out of the Haggadah.

Best Passover Memory: One of my favorite memories of Passover is making homemade Marzipan with my mom. Every year we would take almonds and blanch them until we could peel off the skins. I remember sitting with my mom for hours skinning each individual almond. My favorite ones were the almonds that I could just "pinch out". Every once in a while, I would accidently pop one out of the skin and it would fly across the room. At other times, I would steal an almond to munch on (I love those sacrificial bites). After making the marzipan we would roll them into balls and my job was to place chocolate chips or almond slivers on top. Once again, I would sneak a treat from the pile of yummy marzipan we made.
Andrea Gardenhour, Director of Programming and Travel Initiatives, Melton International
Location: Spokane, WA

Tradition: Susannah Heschel, daughter of R' Abraham Joshua Heschel, introduced the idea of putting an orange on the Seder plate as a symbol of inclusion for gays, lesbians, and all marginalized Jews in the community. It is said that a certain gentleman responded that an orange no more belongs on a Seder plate than a woman does on the bimah. So, as a wife and mother of sons, the orange on our Seder table sends a clear and powerful message of inclusion and acceptance, and is a reminder that we – each and every one of us – are created in the image of God.

Favorite part of the Seder: I absolutely love the hands-on customs of the seder itself. These customs succeed tremendously in setting the tone of the seder, triggering discussion, and ensuring everyone feels comfortable!

Best Passover memory: Every Pesach, ever since we were children, my mother would make the most incredible and fluffy coconut macaroons. I remember as a child trying to find the hidden container on its shelf and maneuvering myself above chairs and benchtops to get to them. As the youngest child, it was even more difficult doing this without getting my brothers' attention!

Special Custom #1: We assign homework. We give our guests an element of the Seder to think about, expand on or interpret. This has led to poetry readings, songs, text study, dramatic choral readings, and really changes up the Seder.

Special Custom #2: I have a hobby as a serious lover of Israeli wines. Once our daughters were grown (maybe a little before), wine tasting became an element of our Seder. We usually have 5-6 open bottles and talk a bit about the land of Israel and connect to the concluding blessing after the 4th cup, which ends with the phrase, "for the land and the fruit of the vine."

Tradition: Every year since I was a child, my mom and I have made meringue cookies together. They are what I look forward to most during Passover. Not only are the cookies my favorite, but the time spent with my mom is priceless. 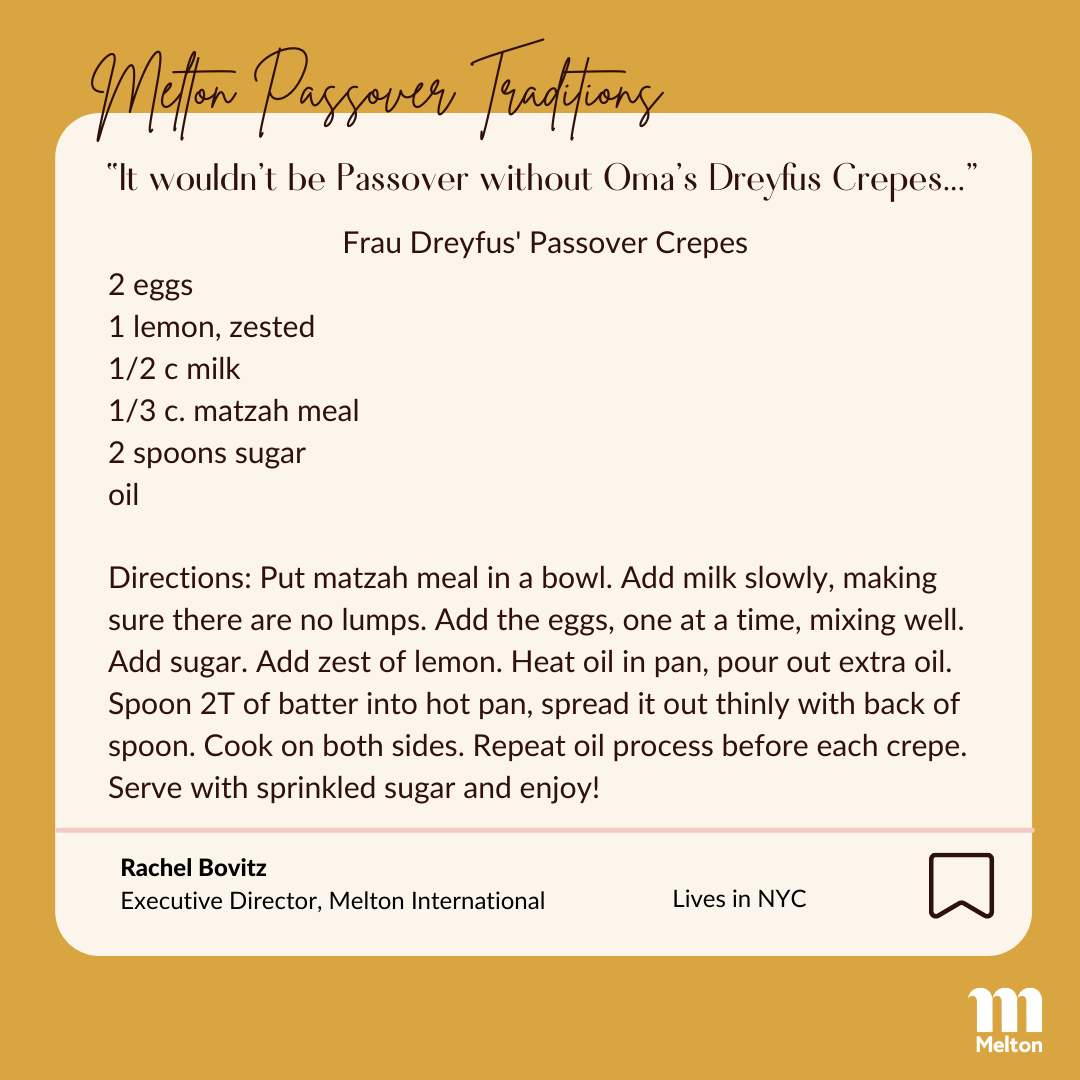 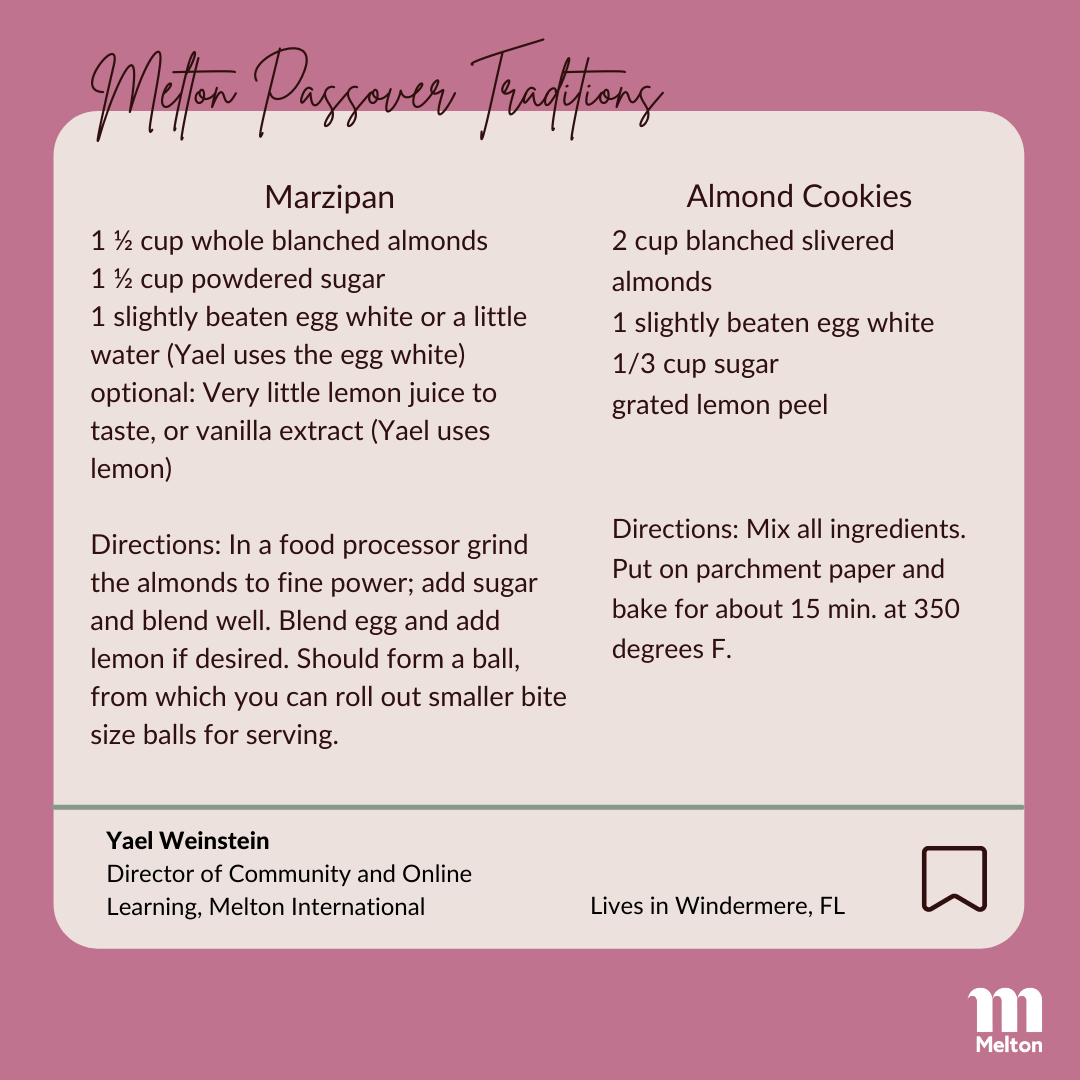 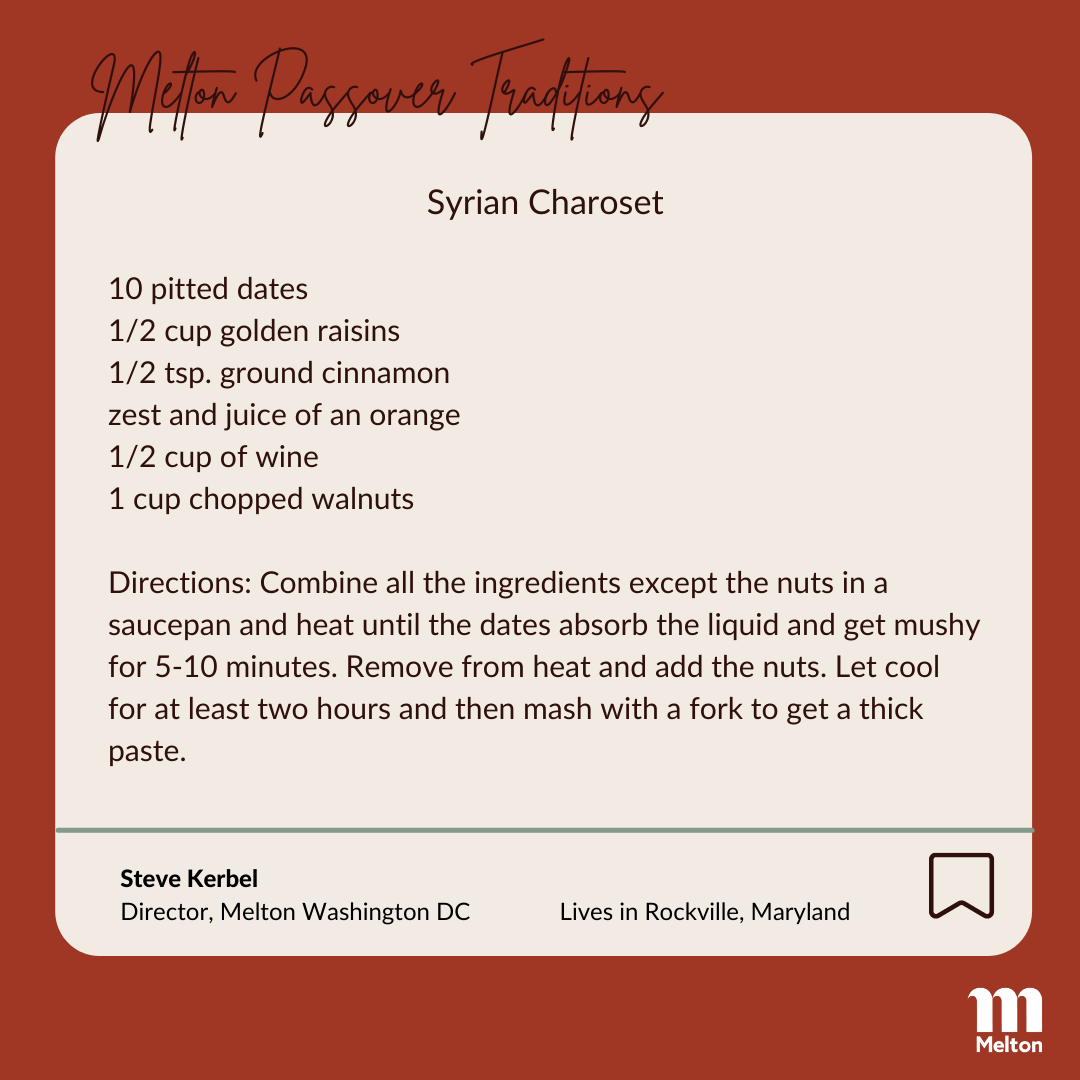 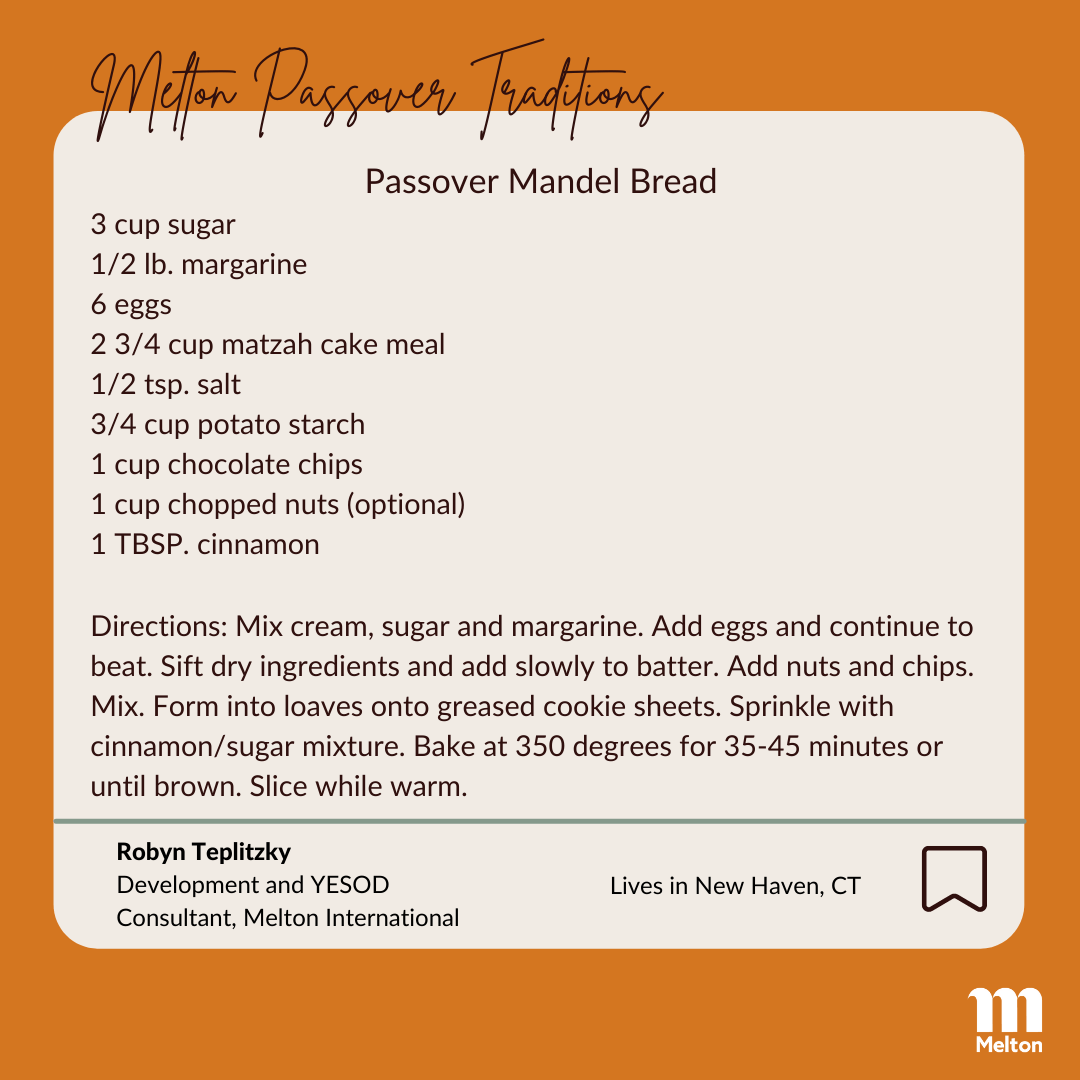 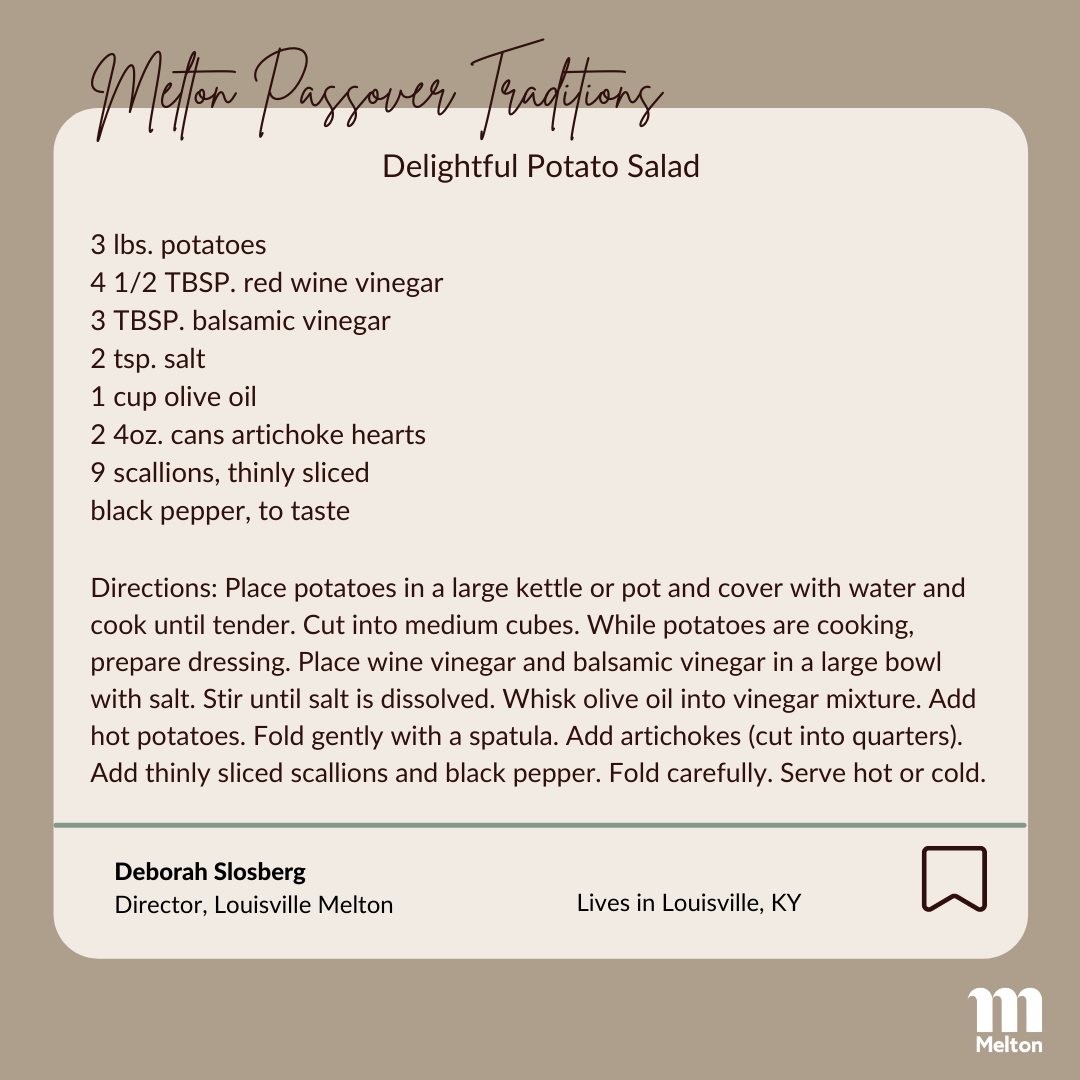