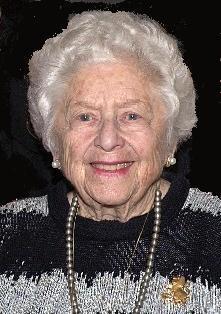 In 1980, Florence Melton z"l, a renowned philanthropist and Jewish community activist, defied conventional wisdom by suggesting that a significant population of adults would commit themselves to an extended program of quality Jewish learning. She then undertook — together with The Hebrew University of Jerusalem — the development of the Florence Melton Adult Mini-School, which was later renamed the Florence Melton School of Adult Jewish Learning.

Florence was born in Philadelphia, PA on November 6, 1911, and grew up understanding tzedaka and the importance of Jewish education. She was raised under the influence and inspiration of her beloved grandmother, a joyous, caring human being, imbued with Jewish values that were part of her everyday life.

Florence was an inventor, an innovator and an activist in many areas of her busy life. In 1946 she founded the R.G. Barry Corporation with her late husband, Aaron Zacks. One of her inventions - the first use of foam in footwear - revolutionized the footwear industry. R.G. Barry is now the largest manufacturer of comfort footwear in the world.

Aside from her family, Florence's leading passion was Jewish education. She served on committees and commissions locally, nationally and internationally. Among the many awards she received was an Honorary Doctor in Philosophy from The Hebrew University of Jerusalem, an Honorary Doctor in Humane Letters from the Jewish Theological Seminary of America, the Scopus Award from the American Friends of The Hebrew University, the Mesorah Award for Jewish Educational Leadership from JESNA, and the Ohio State University Distinguished Service Award. She was inducted into the Ohio Women's Hall of Fame in October 1994.

Florence left a legacy that touched so many.